The Weird, Wonderful and Inappropriate World of Email Handles in Corporate Korea 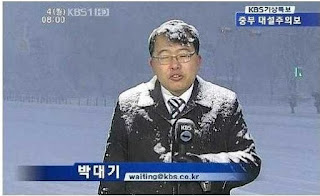 Ok maybe that language is a bit strong but it is certainly a trend that needs addressing. Korean workers are guilty of choosing very odd and sometimes inappropriate work email handles. Clearly Korean companies first mistake is that they give their workers a choice of email handle, but I am very appreciative that they have given workers the freedom to make their own mistakes.

What's more surprising is that Korean corporate culture is itself very structured and governed by a very formal set of perceived rules and etiquette, whether it be introductions, exchanging business cards or even having a drink together there is a raft of small but very important etiquette to be observed for Korean business people.

Picture the scenario of exchanging a business card in a Korean business context- you bow and shake hands with your left hand under your right to show respect, you then receive a business card with both hands again to show respect and scan the card politely, in this instance you look down to the email and see something like "ilovemyself@company.com" (by the way that is a REAL example).

I've come across a raft of bizarre email handles during my time working for and with Korean companies and I have compiled a list of common trends. Now this article has been compiled with the help of some of the expat community in Korea and the below email examples are all REAL and from major Korean companies, like Samsung, Hyundai, LG, Kogas, Major News outlets etc. used in real business situations and emails!

If you have your own example and you would like to share please do in the comments section below!


The Childhood Nickname
"It's what my friends used to call me" is the inspiration behind this email handle and leads sometimes senior and respected business people to use the following with varying success!

Examples -
17Monkey@Company.com (this is a university professor's handle)
Mabari@Company.com (Naver says it's a 'pack horse' whatever that is!)
GiraffeLin@Company.com
Turtle1990@Company.com (I'm sensing an animal theme! and no it's not entourage inspired)

Thank god these people had animal nicknames as kids! If I applied the same logic to my email then you would get "k0ckd4wG69@company.com" or something cool like that.


The Korean Name typed on a English Keyboard
So this one is really just lazy but i guess in a sense practical. This occurs when Koreans simply type their name in Korean and just leave the roman characters. They better hope that people keep their business cards handy because good luck memorizing these!


The Initials with Random Numbers or Sometimes Birthdays
I can relate to this email handle, my first ever email was "mike99012@hotmail.com" and I had a legitimate reason, when i typed in mike@hotmail.com in the 90s it was taken and I was given the above number as a suggestion, I was also 12 YEARS OLD! That said in Korea there are a raft of names that are popular and are fairly homogeneous so that does pose a legitimate problem for many in major corporations which share thousands of employees under the one domain name. In this instance there isn't much other option but I would still want to see a name.lastname(number) variety than the examples below.


The direct translation of Korean name into English, or their own (self-assigned) English name.
This link says it all really - http://cokcok.tistory.com/1452
It's basically what happens when Koreans google translate their name into English or give themselves a hilarious English name

The "WTF"
There is no rational explanation, it happened and now it's on their business card forever! I just hope they don't meet too many English natives, I just wish I could remember more of the examples!


Leave your suggestions in the comments below and I will add to the article!