How to prepare a Korean resume - Part 1

Resumes written in English despite a basic general format are generally different depending on the individual. Decisions such as which font; formatting; colour and margins are left to individual preference and gives applicants the opportunity to express their own individuality all be it in a very subtle manner. In contrast a Korean resume is amazingly standard across almost all companies big and small. Most major corporations will use their own resume form when applicants are applying on-line however the format and questions on the resume are more than likely to be similar or identical to one another.

This Three part series will focus on the Korean resume and the self introduction to help foreign professionals when applying for jobs with Korean companies.

So What does a Korean Resume look like and why is it important?

In this post I have attached a basic template of a Korean CV which you can fill in with your own information. Remember this format is STANDARD you do not need to change anything nor feel bad about using the template - it's not copying! Below I will cover each section of the resume and explain what information needs to be jotted down and where.

But first, Why should we send in a Korean resume as opposed to an English CV?
I recommend to always send in BOTH; an English resume will often be scanned by any foreign employees in HR; While the Korean CV is immensely important. As this format is standard across the country it not only helps HR and the recruitment team to jot down your credentials in their own systems, this is also the version which is passed around to interviewers and to company directors. As you will notice by the style of the resume example below it is completely different to an English resume. A Korean resume wants the basic facts and only the facts. There is no room for embellishment or explanation nor does it require references! Where did you study? what did you study? what where your scores? Simple - YES! but highly discriminative (It's the Korean way) but alas don't despair there is an opportunity to sell yourself with the "Self Introduction" section which I will cover in part 3 of the series.

OK! so now I've explained why the Korean CV is much more important than your English one lets get onto how to fill it in! I will be explaining in English but this information should be of course provided in KOREAN! so if your skills are a bit rough it's time to ask a return favour for all that English editing you provided!


Personal Information and Education Details
This is what the first page top half will look like. Self explanatory bar a few sections. Entering a hobby and a special comment seems rather weird and it really has no meaning but what it does do is give you a one word chance to express your personality through one of your hobbies and/or mention something special about yourself. Say if you are a president of an organisation or you represent your country in some event or sport then you can put that down into the special comment section. If not then you can also just leave it blank. And yes you need to supply a photo and also your age! Illegal in some countries but heck...when in Rome.....

The Education details unlike English resumes will require you to list all of your schooling (Down to at least High School). Most foreigners residing in Korea would have already noticed the emphasis placed on education and this is represented in the resume format. Now  Grade Average will refer to the Korean GPA system of out of 4.5. For example 4.1/4.5; Those from an American system should find it easy enough to convert their out of 4 average but those from a British system of distinctions and percentages then that's where it gets tough!

As an Australian there is no formula for converting our university scoring system over to the Korean GPA system; on top of that fact is that Australian grading is traditionally tougher, biased and non-standard! For example a 70% or over grade is considered a distinction and a decent score at many if not most Australian universities, but to a Korean recruiters eyes a 70% average looks like a 50% average - it's rubbish! So what do you do? One option is to just average it out yourself and self evaluate (But you will have to explain how you come about that score when they ask for a copy of your results). I averaged that a common distinction (D) is around 4/4.5 and a HD is somewhere around 4.5. Alternatively and probably your best course of action is to call your local embassy and refer to the education section; they should be able to help you convert your scores and also will be willing to vouch for that adjustment with recruiters. How do I know this? When I worked in the Australian embassy the education team would field calls regularly from complaining students and confused recruiters! So yes....it's OK to call them!

Note: I have deleted the sections which ask for family information and health. It's not relevant to a foreign applicant but just sympathise with the local applicants for a moment in that they have to list who their family are and where they work as well as declare any health issues. 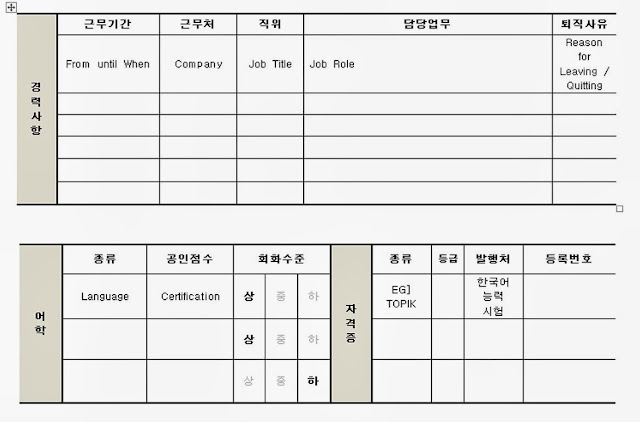 Work Experience and Language Ability
You would notice that there is not much room to describe your job role. In an English resume you are often asked to go into brief detail as to what projects you worked on and what achievements you might have made at the company. NOT in Korea. All they want is the basic information of your role? IE. I was a HR generalist; I was a Salesman of ABC Product; Accounting of B Subsidiary; I was  IT support etc.
Recruiters will also ask for your mode of leaving your previous companies. Were you fired? did you quit? did the contract end? or are you still currently employed?

Now for language section; the three categories you can see is to express what level you are in that particular language. Left to Right is (Expert; Intermediate; Beginner) then on the next table you will have to list down the proof (if any) that you have said language ability. This is based on the Korean love of standardized testing of languages - The TOEIC's; IELTS; HSK etc. If you have taken the TOPIK Korean test then list the details down here. If you are a native then naturally no certification required.

Email ThisBlogThis!Share to TwitterShare to FacebookShare to Pinterest
Labels: Finding a Job in Korea